Home » Web Development » Speed Up Your Website With HTTP/2

Every webmaster out there should know about HTTP/2, yet few actually do. In fact, the vast majority of website owners these days would be hard pushed to explain HTTP/1, despite the fact that almost all of them rely on it when it comes to establishing and maintaining their web presence.

The reality is that HTTP/2 could have a remarkable effect on improving the speed of your website, and it is something you should consider. But what actually is it, and how does it differ from HTTP/1? What benefits can online business owners expect from embracing the brand new HTTP protocol?

In this article, we’re going to take a look at the simple facts behind HTTP/2 and explain what it is, what it does, and how anyone concerned with website user experience should be considering it. But first, let’s take a look at a brief history of the HTTP protocol.

Everyone knows about HTTP/1, even if they don’t recognize the name. HTTP/1 (Hypertext Transport Protocol 1) was the standardized transfer protocol established by Tim Berners Lee way back in 1989. HTTP defines how data is passed from one source to another – from computer to computer, for example. It also defines how messages are formatted and transmitted, as well as the actions that things like web servers and browsers take when presented with commands and instructions.  In essence, it is the reason you are reading this right now on your computer, smartphone, or tablet.

Back in 1999, the Internet was in its infancy. Web pages and connections were painfully slow – most people over a certain age will remember waiting for their dial up modem to load up a website. However, a quick look at a contemporary website these days in comparison to a site from the mid-90s and you can see that things have progressed.

And therein lies the issue with HTTP/1. The way we use the Internet today is vastly different to how we used to, and the original technology is full of limitations. A more complex environment requires a more complex solution – which is one of the major reasons behind the development of HTTP/2.

The introduction of HTTP/2

HTTP/2 is a relative newcomer to the web development environment, published as a Proposed Standard in February 2015. All of the major web browsers support it, such as Chrome, Firefox, Opera, Internet Explorer 11, Safari, Edge, and Amazon Silk. It’s one of the biggest changes that have occurred on the web so far, but to date, few companies are getting involved – which makes for an opportunity for anyone wishing to embrace the future.

As we discussed above, HTTP/2 was introduced to deal with the increasing complexities of the modern day web. The old web protocol (HTTP/1) is slowly transitioning to HTTP/2, to allow the web to be able to handle ever more amounts of data and information in a more robust fashion. In layman’s terms, it’s similar to the difference between a runner in high school and an Olympic athlete – faster, stronger, and more capable. In fact, tests on HTTP/2 have revealed the speed of the protocol could be up to 120% faster than HTTP/1.

How is it faster?

So, now we have established that the HTTP/2 protocol is a leaner, meaner version of its ‘ancient’ ancestor, how does it actually work? The answer lies in a few areas that have caused HTTP/1 many different problems.

The first of these issues is due to the way that HTTP/1 can handle information. Basically, when the end user requests a file ( a web page, for example) HTTP/1 only allows it to travel through a single connection, one by one. This occurrence means that every action taken has to occur one after the other. So, the protocol requests a web page, waits for a response, downloads the file and then moves on to the next one, in order. It’s a little bit like a waiter bringing out each of your dishes separately when you go to a restaurant – incredibly inefficient.

While the actions are relatively quick when taken singly, it is easy to see where HTTP/1’s limitations lie. Page load times increase significantly as each part of the process is handled one after the other. And if you have a website with a lot of requests to get through, the longer it will take to load.

HTTP/2, however, is a little different in the way it works. Firstly, it uses a process called ‘multiplexing,’ which can get through multiple files over a single connection, as opposed to processing each one separately. Taking the waiter analogy we used above, this time, it’s like your waiter bringing out your entire meal on one tray – faster, more suitable to the restaurant experience, and more convenient.

It also uses something known as header compression. Whereas HTTP/1 requests were always transmitted in plain text, with HTTP/2, the protocol compresses and sends in binary, making things a lot more efficient. Less time is wasted than with HTTP/1, more bandwidth is saved, and page load speeds increase dramatically.

Also, HTTP/2 uses a function called ‘server push.’ It’s a great time saver, in that it informs the browser of the precise information it needs to render a relevant page and is highly efficient in comparison with HTTP/1. With the old protocol, the HTML file is always sent first, before the browser requests everything else, including CSS, images, and JavaScript file. This almost always leads to slow downs, as the connections have to turn on and off during each request.

The importance of HTTP/2

For businesses, HTTP/2 is vital for a number of key reasons. First of all, the faster your website loads, the quicker you can serve your customers online. In an increasingly fast-paced world, no consumer has the time to wait 5-10 seconds for a business website to load – they will just go elsewhere. It’s especially true for companies who hold a lot of information on their website – large video files, for example, or graphic and image heavy sites.

Faster web pages also help to improve search engine rankings which is vital to ‘getting found’ online. The likes of Google and Bing are starting to place a lot of value on the experience of the user, and given that most people hate slow-loading websites, you can expect a penalty if your site is flagged for being too slow.

There’s another important part of the equation, too. Given that almost all the major browsers support HTTP/2 these days, the current number of people able to take advantage of the new protocol is somewhere in the region of 75%. That’s a huge number and one that no business can ignore – especially when you consider that number will only rise in the near future. Plus, as people’s experiences get better due to the speed of HTTP/2, they will become used to it, meaning any website using HTTP/1 will soon start to feel old and slow in comparison for the modern user.

Finally, when you consider all the other benefits of HTTP/2, it’s hard not to make the decision to take the plunge towards the new protocol – even if only from an SEO perspective. HTTP/2 is more secure, for a start, meaning the search engines will give you a boost in rankings. It’s a mobile friendly protocol, too, and features like multiplexing mean that it is simpler to use. HTTP/2 is compatible with its predecessor as well, meaning there is literally zero reason for refusing to make the change.

However, as with all new tech, HTTP/2 isn’t without its problems. Let’s take a look at some of those right now.

Are there issues with HTTP/2?

As a business owner, you should always be aware of the problems that could arise with using new technology, and it’s the same principal for making the switch to HTTP/2. First of all, it’s important to understand that the 25% of people with no access to HTTP/2 still represents a significant share of the Internet user base. And if you are operating in a developing country or region that is still using older web servers, it may not be practical to take the plunge just yet. KeyCDN’s HTTP/2 test tool can verify if your server supports HTTP/2.

Making the switch isn’t as simple as pressing a few buttons, either. For example, let’s say your site is using HTTP/1 but hasn’t yet started using HTTPS. In this scenario, a complete migration will require a lot more work due to the fact that HTTPS is a requirement of HTTP/2. It means shifting each page and URL to HTTPS, which is a positive ranking factor for the likes of Google. When using HTTPS with HTTP/2, it will give a significant speed boost to your site as evident on the test site httpvshttps.com. 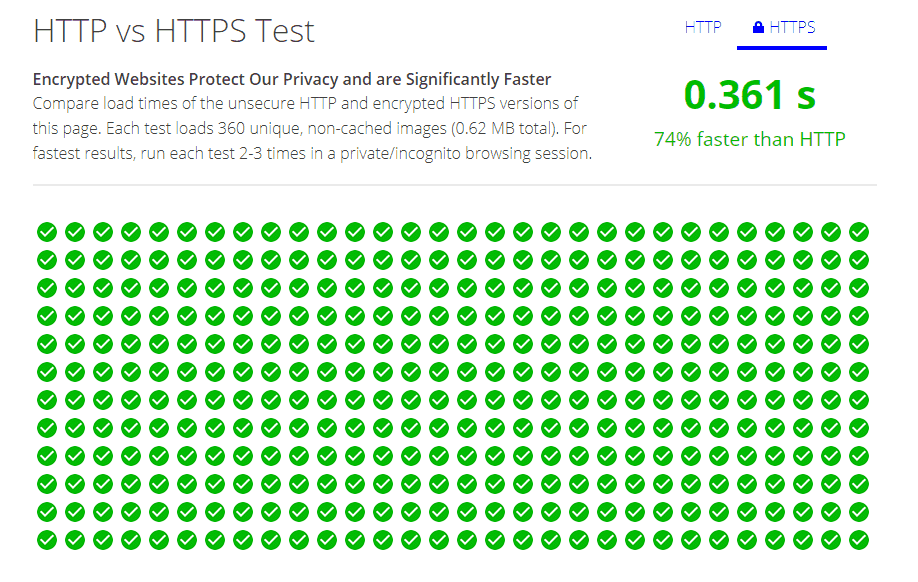 It’s a big project to undertake, business owners will have to establish whether or not it is worth the time and money. For instance, if your company only uses a lightweight, simple website, there may not be too much of an improvement to be made from upgrading to HTTP/2, whereas the process could cost you a lot, both in money and resources.

It is likely that HTTP/1 will be with us for some time. The Internet is currently undergoing something of a change, in that webmasters and business owners are beginning to understand the benefits of providing media rich experiences for their customers and audience. Given that HTTP/2 can handle the extra complexities of all these media, it makes sense for those business owners with relevant services to embrace the change. It’s cheaper to run and makes the process of delivering a media rich environment much more efficient.

The rise of mobile search is a key point to consider, too – well over half of all searches worldwide are now performed on a tablet or smartphone. That number is only expected to rise in the future, so business owners should be looking at technology that allows them to present themselves online to mobile users in the best possible way. HTTP/2 fits that bill entirely.

The modern online consumer is also highly concerned with security these days – thanks in no part to the many different hacks and scams that dominate the news reports. Back in the early days of the web, people tended to be relaxed about security, whereas today, it is all many can think about. Using the HTTP/2 protocol can help businesses prevent many different kinds of threat, particularly those which occur when transmitting data between clients and servers. Full encryption is a prerequisite for any online business these days, and again, HTTP/2 delivers.

While making a move from HTTP/1 to its successor isn’t necessary for all businesses right now, there will be a time when it is imperative. Speed really is of the essence when it comes to consumers using online services, whether they are buying products or just browsing through a website – and HTTP/2 can help you deliver the experiences your customers need.

There is a competitive advantage involved, too, as not everyone is using the new protocol yet. If you are struggling to beat the competition, it’s certainly something to think about going forward. While making a move to HTTP/2 is not currently a requirement from the likes of Google, it will be eventually. And your business could be well ahead of the rest if you decide to take the plunge right now.

So, what are your thoughts on HTTP/2? Have you made a move already or do you plan on doing so in the future? Let me know your thoughts and experiences!